High Point Host Families Step Up to the Plate

Only 25 days stand between us and the first pitch of the High Point Rockers’ 2021 season! So it won’t be long before our favorite Rockers players are making their home-away-from-home here in our city. Have you ever thought about what it would be like to live a life on the road, traveling from place to place, playing game after game? Many of our Rockers players have to spend a season away from their hometown and often even their families, finding ways to sleep comfortably on a bus when they travel to away games.

That’s why it’s up to the High Point community to step up to the plate! The High Point Rockers, like other teams in the Atlantic League, depend on the citizens of High Point to open up their homes as host families for the summer. And this year, they need you to consider supporting our city by hosting a player. 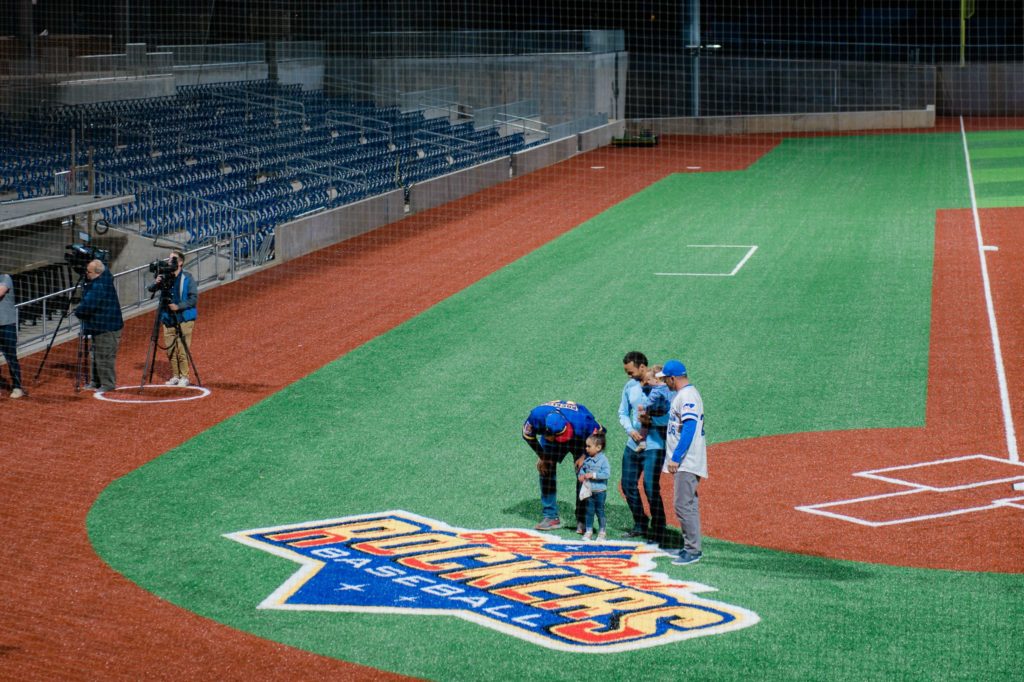 Host families are what Christian Heimall, General Manager of the Rockers, calls, “the backbone of minor league sports.”

“The life of a minor league player is not as glamorous as you think,” Christians says. “Giving players a safe place to live while they’re in this town is such an important thing for our team and city to offer.”

Host families are local families or individuals who are willing to provide a space in their home for Rockers players to live during the season. Oftentimes in minor league sports, players can be traded several times in one season, so it’s not feasible for them to get a short-term lease. Because their salary cap is set by the Atlantic League, it’s also not financially practical for them to live all summer in a hotel.

Giovanny Alfonzo, shortstop for the High Point Rockers, has been part of the team since the inaugural season in 2019 and lived with a host family here in High Point. Originally from South Florida, and living in the offseason in Tampa, Gio can attest that paying out-of-pocket to stay in a hotel all summer isn’t feasible for most minor league players. But more than that, he says that having a host family provides a huge sense of comfort and home, even while he is far from his own family.

“If you’re in a hotel during your season, you’re probably by yourself,” Gio says. But with his host family, a married couple with three young kids, Gio didn’t feel alone during his time in High Point. “It’s nice to hear somebody in the house each day.”

In his time living with his host family, Gio says they would come to games and cheer him on as if they were his own family. And when Gio’s parents came from Florida to watch him play, his host family lent them a spare bedroom.

“It really does feel like your family,” he says. “I watched their kids grow up during that time.” While Gio’s first host family has since relocated to Florida themselves, Gio still stays in close contact with them.

So why should you consider hosting a Rockers player for the summer? While it may sound overwhelming to open up part of your home to a stranger for three months, those strangers don’t stay strangers for long. Not only can players like Gio vouch for that, but Evie Cottam and Emily Thiel, two host family members also agree.

“You get a new member of the family!” Evie exclaims. Evie, a long-time High Pointer and self-designated “team mom” for the High Point Rockers, was one of their first family hosts during the Rockers’ inaugural season in 2019.

“Our daughters tease us that our job is to walk through the dugout with dixie cups of orange slices and sunflower seeds, but that’s not really our job,” Evie laughs.

“I would probably do it if they asked us to!” Emily jumps in. As another High Pointer who opened up her home during the inaugural season of the Rockers, Emily is also a champion of the Rockers Host Family program.

“Getting to know the players, knowing the staff… You just get the feeling that you’re part of the entire team,” she says.

For both Emily and Evie, when their families learned about the Host Family Program, it was a no-brainer for them to give it a try. Close friends who shared responsibilities as “swim moms” for their daughters, as well as both being former Junior League of High Point presidents, Evie and Emily are both passionate about athletics and community giving. They joined the Host Family program as it presented a unique opportunity to give back to the High Point Rockers, as well as the whole High Point community.

“Hosting makes the Rockers as good as they can be for High Point,” Emily explains. “And most of these players are giving more to the community than they are receiving themselves.”

“And the games are so much more fun when you get to know the guys!” Evie adds.

She notes that it also builds morale for the players to know they have a “family” in the stands cheering them on to victory. She recounts how at most ball games, her husband, Dick, would always call out the same cheer for their player, Quincy.

“If my husband doesn’t yell, I’ll get a text asking, ‘Where is Dick? Is he here tonight?’” she laughs. “You really do get a new member of the family.”

Emily agrees, saying that when she cheers for their players, she feels like she is cheering for one of her own children. The players and families all begin to overlap, as they get to know each other throughout the season.

“We’ve told Quincy we expect to be at his wedding,” Emily says.

Speaking from a player perspective, Gio has many fond memories of his first year living with his host family. He remembers a particularly special moment that reminded him of the impact he was making on his host family’s kids. One afternoon before heading out to the field, Gio saw their young son working on batting practice with a t-ball set.

“He was out there swinging, and he was getting a little frustrated,” Gio remembers. “I stopped and worked with him for a second, and he finally hit the ball. He looked up at me, and I thought for a second he was going to hug me, but instead he took off running the bases!”

While Gio, Evie, and Emily all share about the strong bonds that have formed through the program, they also emphasize that the High Point Rockers’ staff goes above and beyond to make sure that the host family is a good fit for the player and vice versa. While some players want to spend time with the families, building a relationship, others may prefer to keep to themselves. And Christian and his staff strive to make sure it’s the right fit for all involved. 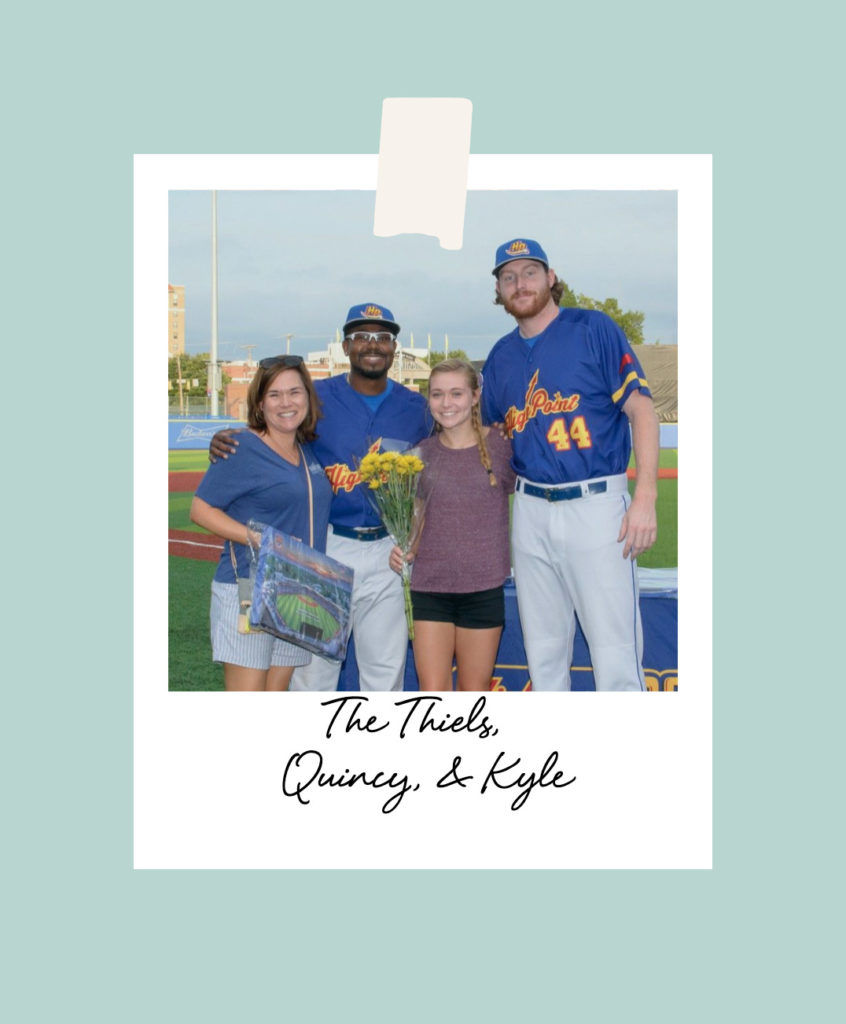 Rooms offered by the family can include everything from a guest room to a separate guest house. And the host family sets the house rules. But Evie and Emily both agree that there is such a high level of mutual respect from both players and families, they haven’t personally faced any issues.

“I cannot get the players to not call me Mrs. Thiel,” Emily laughs.

Christian adds that the entire Rockers’ roster is filled with players who are the right fit not just for their host families, but for the overall High Point community.

“Our roster needs to represent the city the right way,” Christian notes. “We expect our players to have the utmost level of respect and class.”

Evie also adds that at the end of the day, the players are here to work hard and do their job: playing ball.

“They’ve dedicated their entire life to baseball,” she says, adding that having the support and respect of a mutual family goes a long way. “You get to see both sides of the player – when they’ve had a great night and a not great night.”

And while the individual relationships forged between players and host families are a huge component of ensuring that the Rockers have a successful season, the host family program causes an even greater ripple effect on the High Point community.

Having a strong host family program is a huge recruiting tactic for players in minor league sports, and it also strengthens the High Point Rockers’ organization overall.

“The host family program makes people part of our Rockers’ family and what is happening in High Point – which is a tremendous amount of growth,” Christian says. 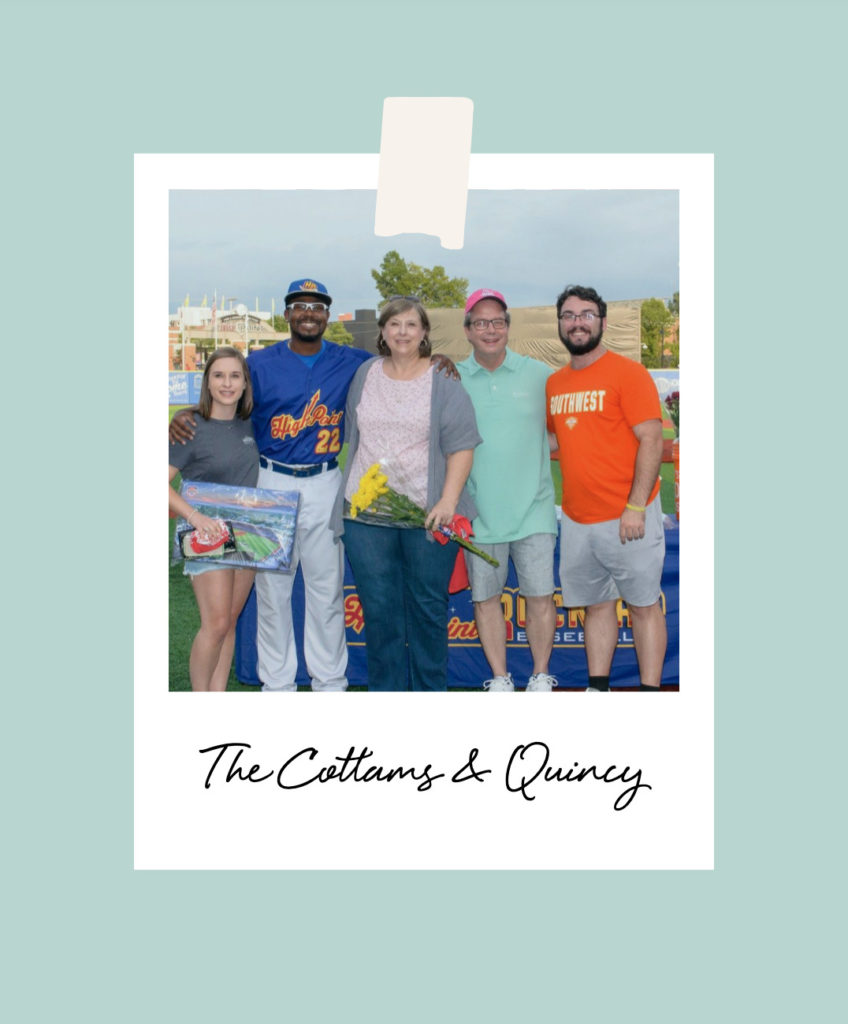 There is also something to be said for the way the Rockers’ players build a life for themselves while they live in High Point, often bringing their own family members to visit, live, and invest in the city.

“These guys want to be part of the community,” Evie explains. “Host families are a great way for them to be ingrained in the community.”

Everyone involved in the host family program at the Rockers – from players, to host families,

to staff – agree that there is something special about High Point when it comes to making our players feel at home.

“One of our players who lived with us said to me, ‘I’ll play every season if they’ll have me,’” Emily remembers. “He said, ‘There is nothing better than High Point.’”

Gio, who is returning to play shortstop with the Rockers, has lived all over the country, playing for teams like the Long Island Ducks, the Miami Marlins, and even the New York Mets. After seven years of playing professional baseball, he says he has never been in a community like High Point.

“I’ve never been in a community as close-knit and fun as High Point,” Gio says. He notes that the fan culture for the Rockers is unlike any other he’s experienced. From his host family kids calling his name each game, to a row of dedicated fans, to citizens recognizing him in public, people are constantly encouraging him and making him feel at home.

“I could be at Walmart and people I’ve never met will come up to me so open-armed and willing to help,” he says. “I can’t wait to be back in High Point.”

And the feeling is mutual; we can’t wait to have our High Point Rockers back in town.

Ready to apply to be a host family? Download an application here or email Christian Heimall (cheimall@highpointrockers.com) with questions.