A Hobby to Consume: Sour’d 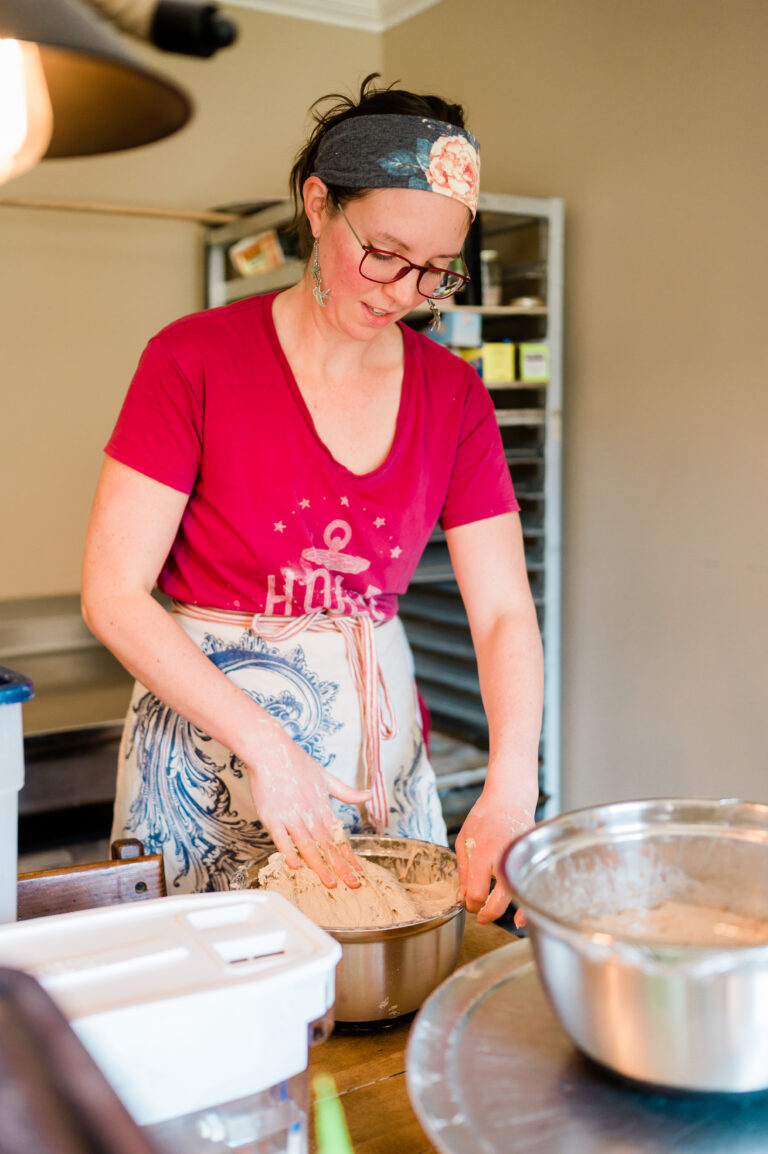 For Sara Dutilly, few things in life bring her more joy – or anger – than bread.

“It angers me sometimes to think about cheap bread,” says the High Point-based baker and owner of the cottage bakery, Sour’d. “I know that sounds silly, and I understand why the manufacturing of cheap bread began, but I truly believe in the slow way.”

The “slow way” is the way Sara bakes the artisan loaves of sourdough bread that she sells from her home bakery and at the High Point Farmer’s Market. The process is long, but Sara has come to learn that more often than not, the best things in life take time.

“I love watching the lumpy flour-and-water mixture transform into a smooth, cohesive dough,” she says, explaining the baking process. “The flour absorbs the water and becomes smooth. The leaven is added and fermentation creates gas bubbles that make the dough rise… It really is an amazing, age-old process that just never gets old for me.”

Sara, who has been baking for 12 years now, started baking a year after she and her husband, Neil, were married. Neil, who had always wanted to become a baker, was the first in their household to give bread baking a try. While Neil’s bread always turned out hard and dense, Sara surprised herself when her first attempt at a basic loaf of white sandwich bread turned out deliciously.

“I learned early on that there’s something innate about baking,” Sara explains. While her husband had been following recipes for years and still not turning out delectable dough, Sara was able to get the hang of baking on her first try.

“When I made that first loaf of bread, I didn’t knead it as long as the recipe suggested. Instead, I stopped when the dough felt done,” she says. “I had no reference, but somehow, I just knew it was ready, and I disregarded the recipe because of that instinct. I have definitely made some trash bread over the years – we all must fail sometimes, right? – but I just keep going back to it.”

“I was captured by the process,” Sara remembers. Using commercial yeast, a fermentation agent added by many commercial bread bakers, Sara continued to expand her bread-making skills for years, often baking loaves for family and friends. But when she decided she wanted a new challenge, she made her own sourdough starter, a fermented bread starter that is more nutritional and natural than commercial yeast.

“Sourdough is truly magical,” Sara says. “Well, it’s actually science, but no matter how many times I read about the science behind it, it still just seems like magic to me. How can flour, salt, and water make bread? But they do, every time.”

Even more surprising, Sara has no formal culinary training. What she knows of sourdough, she learned from watching videos, reading, and experiencing a little bit of trial and error. After friends and family started offering to buy her bread from her, she wondered if her love for baking might become a business.

As a writer and mom of four, Sara has spent her time homeschooling her children and working on writing her stories, poetry, and novel. But she was intrigued by the idea of running her bakery from her home, which would still leave her free to invest time in her family and writing. When a friend told Neil and Sara about a commercial bread oven and proofer for sale, the couple jumped on the opportunity and installed the appliances in their home kitchen.

“We had to move the refrigerator into the pantry and the pantry into the laundry room, but everything still works,” Sara says. “We even had the kitchen certified earlier this year.”

When the Earth Fare grocery chain closed, Sara purchased a lot of bakery equipment from their store.

“That was really the last piece of the puzzle to how I might be able to bake enough bread to sell in the community,” she says, noting how in the last year, the transition from baking as a hobby to baking as a business has been relatively smooth. Despite the fact that she sometimes finds herself overwhelmed by bakers who have the education to back up her business, Sara keeps moving forward.

“Almost every week I think, ‘Why am I doing this?’ but I know why,” says Sara. “I know I’m not really an amateur. Julia Child said, ‘The art of bread making can become a consuming hobby, and no matter how often and how many kinds of bread one has made, there is always something new to learn.’ She was absolutely right, and I should probably write that quote down and hang it up it in my bakery.”

Much like the sourdough bread that Sara now makes once a week from her home bakery, it took some time for Sara to make High Point her true home. A Florida-native who moved to High Point in 2004 to attend High Point University, Sara often found herself homesick for the Sunshine State in her first few years at college. However, Sara eventually began making friends in High Point, and later met her now husband.

“We have lived in the area ever since,” Sara says. “When I think about where my business should go, High Point is just the answer.”

Now, Sara looks at our growing city with a lens of love and appreciation. She names exciting changes in our city, like Truist Point, the children’s museum, new local businesses, and more.

“I can’t think about the city’s future without thinking about my kids, though. They are the future,” she says. Sara’s children love High Point and always look forward to HPU Alumni Weekend every year with their favorite Panther – their mom. Sara laughs, thinking of times she considered moving away from High Point.

“Because I stayed, I have this completely wonderful life,” she says. “That’s the future: letting go of whatever negative experiences we may have had and focusing on what is good and lovely. No city is perfect, but High Point is home to so many admirable businesses and people – people who do love the city. I truly believe it only gets better from here.”

And Sara hopes that her family and Sour’d will continue to be a part of High Point’s rich and growing legacy. While she’s open to ideas for how she can grow Sour’d – maybe a commercial storefront where her little ones can learn the business from their mom? – for now, she’s content knowing her bread is indeed part of serving the city she calls home.

“I believe in good bread that nourishes bodies,” Sara states. “I believe that bread is more than just something to carry a sandwich. I don’t know how bread can help a community, but somehow, I know it does. I love getting to know my fellow High Point business owners and the community we serve. It’s almost like restoration is taking place in my own heart toward the city every Saturday that I step into the High Point Farmer’s Market.”

Because Sara knows, bread baking and community building often require very similar ingredients: patience, commitment, and love, and the finished product is always worth it.

Want to learn more about Sour’d or get your own loaf from Sara’s bakery? Find her on Facebook at @Sour’d and on Instagram at @sourd_bread. Or email her sourdbread@gmail.com.