If you head over to Oak Hollow Tennis Center, you’ll see just how much our city values tennis. With hard courts, clay courts, and even indoor courts, there’s no shortage of places to practices your backstroke. And for Tennis Director, Junius Chatman, it didn’t take long for him to realize how much High Point values him.

As the Tennis Director and resident Tennis Pro at Oak Hollow Tennis Center, Junius (or “Junie” as he is known by family, friends, and colleagues) spends his days in High Point instructing, managing, and facilitating at the tennis courts. Originally hailing from Richmond, VA, Junie was faced with the choice 16 years ago of moving from Michigan back to his hometown or moving to High Point.

“William Covington, who was in charge of Parks & Rec at that time, offered me a position in High Point at the same time as a facility in Richmond,” Junie explains. Junie’s family, including his five kids, needed to stay in Michigan to finish out the school year. Instead of having to foot the bill for two places to live in the meantime, Junie was offered an apartment by the High Point Parks department if he was willing to take the job.

“At that point, I thought that the city really wanted me to come because they didn’t have to do all that,” Junie recalls. “They could have said, ‘Okay just take the job in Richmond.’”

But High Point Parks & Rec didn’t, because they knew how invaluable Junie would be to growing and developing High Point’s tennis program. Sixteen years later, you could say that William Covington’s investment in Junie paid off. 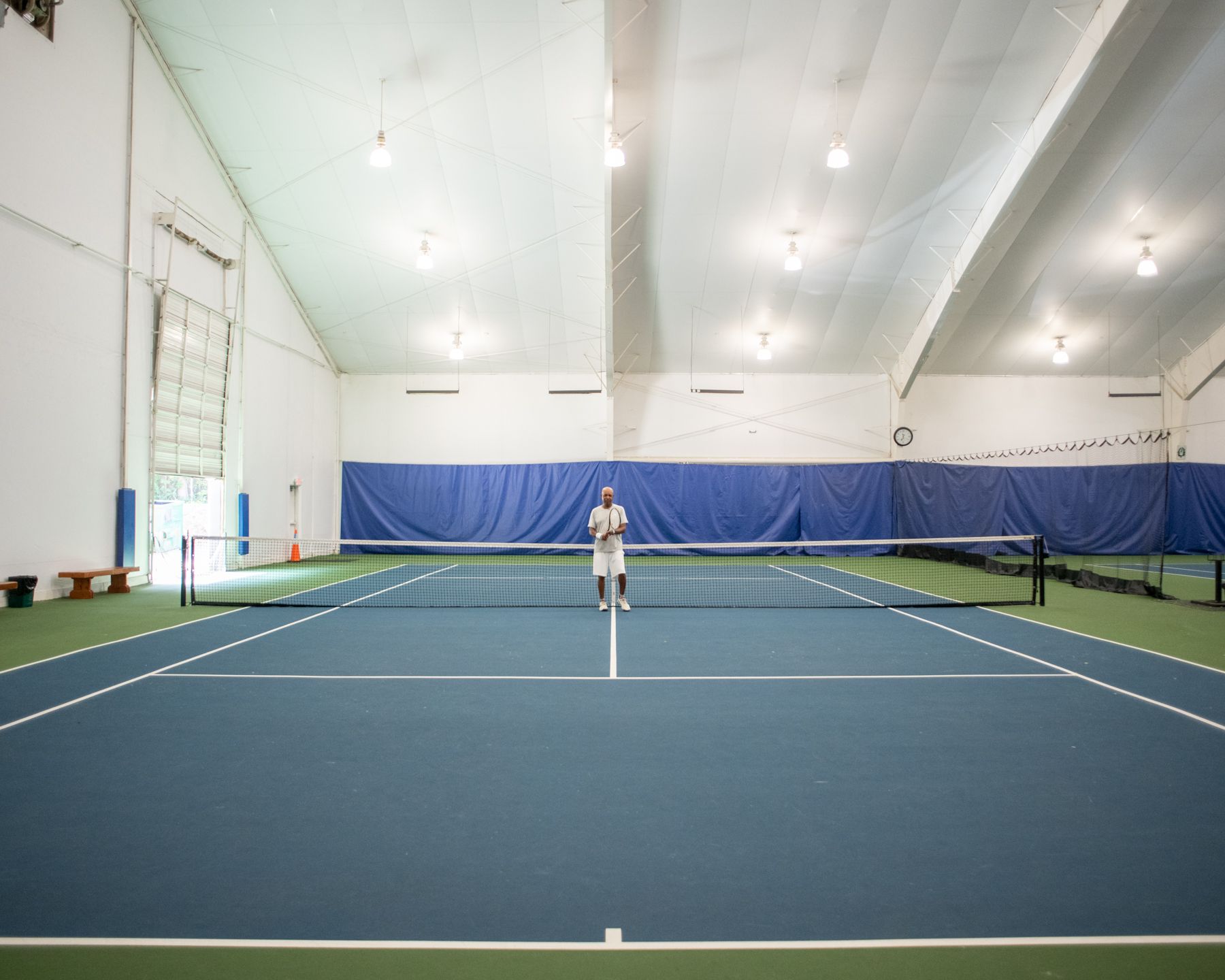 So who is Junie Chatman? Well, he just so happens to be a four-time ACC champion and the first African American to win the Virginia State Men’s Open Championship. He was at one time in the Top 100 doubles players in the world, and he was selected by the U.S. Tennis Association as one of the top 50 Black coaches and teaching pros in the nation. Not to mention, he was the first African American to receive a full tennis scholarship from the University of North Carolina at Chapel Hill.

But before all of that, before he ever came to High Point, Junie was just a kid in Richmond who used to walk by tennis courts at Byrd Park.

“My cousins and I would ride our bikes over to Byrd Park in the mornings to go play baseball, and on the way there we crossed over the tennis courts,” Junie explains. At 11-years-old, Junie saw other kids his age playing tennis and asked to start playing as well. Unbeknownst to him at the time, the instructors at these park camps were college players from UNC.

After one summer, it was clear Junie had a gift for the game. He received most improved male player and was selected by the Richmond Tennis Patron’s Association to take part in an exclusive indoor tennis winter program.

His father would drive him to the Westwood Raquet Club at 6 or 7 A.M., and wait patiently in the parking lot on those chilly, winter mornings.

“At the time, that facility did not allow Blacks to become members,” Junie says. “So I was able to play on the court, but my dad wasn’t able to come into the facility.”

While Junie says he didn’t realize at the time the depth of discrimination facing him and his family, he does recall a memory from when he was several years older that hit him with the realization that he was treated unfairly because of the color of his skin.

“One of the tennis programs was on a Saturday morning,” he explains, “After the program, all the kids went to the lounge to have lunch. When I was there, the restaurant manager told me I had to leave because they didn’t serve Blacks, and that kind of hit me hard.”

While the club sent a letter of apology to Junie’s parents, the memory stuck in his mind. But Junie didn’t let that kind of treatment define him, and he went on to continue excelling in his game. Eventually, Junie’s skill and talent earned him the victory in the Virginia State High School Championships in singles and in doubles during his senior year – making him the first African American ever to win that title.

But the moment that shines brightest in Junie’s memory of his tennis career is the day he was offered a full ride to UNC by tennis coach, Don Skakle. After being heavily recruited by several schools, Junie decided on Chapel Hill, remembering the shaping influence of those first Carolina tennis instructors in Byrd Park.

“My parents were out of their minds with joy,” Junie remembers. As the first Black tennis player to ever receive a scholarship from UNC, Junie was warned that at times, the road wouldn’t be easy.

“My dad immediately said, ‘Oh, he’s fine to do that!’” Junie laughs. His mother voiced more trepidation, but Junie was committed. His experience ended up being one of the best, winning him more tennis matches, and even some prized memories – like those shared with his college roommate, friend, and future New York Giants linebacker, Lawrence Taylor.

And just like any college athlete, Junie had to work to balance school work and practice, as well as thoughts of the future. He also carried with him his formative years in Richmond. Once at a tournament in college, Junie returned to Richmond to play in a state tournament. Rain threatened to move the match indoors, and the tournament wanted to play at the Westwood Raquet Club where Junie practiced all those years ago. Yet this time, he refused, knowing his parents and family wouldn’t be able to come inside to see the tournament.

“I said I didn’t want to play over there because they wouldn’t allow Blacks,” Junie says. The tournament threatened to default him if he didn’t agree to play, but he stood his ground. “I guess you’ll have to default me, but that will be a story in the newspaper,” Junie said, and the match was moved to a different facility.

By 1978, Junie’s time at UNC had come to an end, but he had garnered the skills and wins needed to play on a pro tour in Germany after graduation. But after several years of “globe trotting,” Junie began to envy his friends who had started families and careers in the States. So he turned to his mentor – Richmond native and renowned tennis champion, Arthur Ashe – for guidance on his next step. Ashe advised Junie to gain more business experience and set him up with a job in a bank.

“That just wasn’t me,” Junie says. “I’d be sitting in the bank in the summertime, and I’d see all these people outside in their shorts.”

When a job as a tennis director opened up in Richmond at a tennis club, Junie jumped at the chance. And while he had all of the tennis know-how to be a good director, Junie knew a new kind of learning curve was coming his way.

“The playing skills you need to be a tennis director you get on the tennis court,” Junie explains. “But you don’t have the business skills.” He explains how tennis programs hire big-name, former tennis players to attract interest to the program, but eventually, many of those players leave because they don’t have the ability to manage and run the facility like a business.

“They know how to play tennis, but that’s just part of it,” Junie says. But Junie was determined to develop the business prowess needed to stay as a tennis director. He learned how to manage and lead a staff of facility maintenance workers, tennis instructors, and additional staff. He learned how much upkeep it takes to maintain expert-level clay courts. And he learned that sometimes what you say you’ll never do, is exactly what you end up doing.

“Never say what you won’t do,” Junie jokes. For him, that meant teaching. Watching tennis instructors work with a wide array of skills and ages on the tennis court, hitting balls and patiently practicing swings didn’t appeal to Junie. But sooner than later, Junie found himself working with tennis players from top junior players like he once was to adult recreation players.

“I couldn’t understand at first how the adult recreation players couldn’t do what I did,” Junie says. He realized eventually that players who picked up the sport for health and fun a few years ago needed different motivation than the junior players he was familiar with. As he worked with rec players, as well as young children just learning to play for the first time, Junie realized he had to instill more than just good technique and skills in his players; he had to instill fun.

“The key is, ‘Can you teach them not only how do it, but how to enjoy it?’” Junie says. “If something is fun, you’ll do it more. And if you do anything more, you’ll get better.” 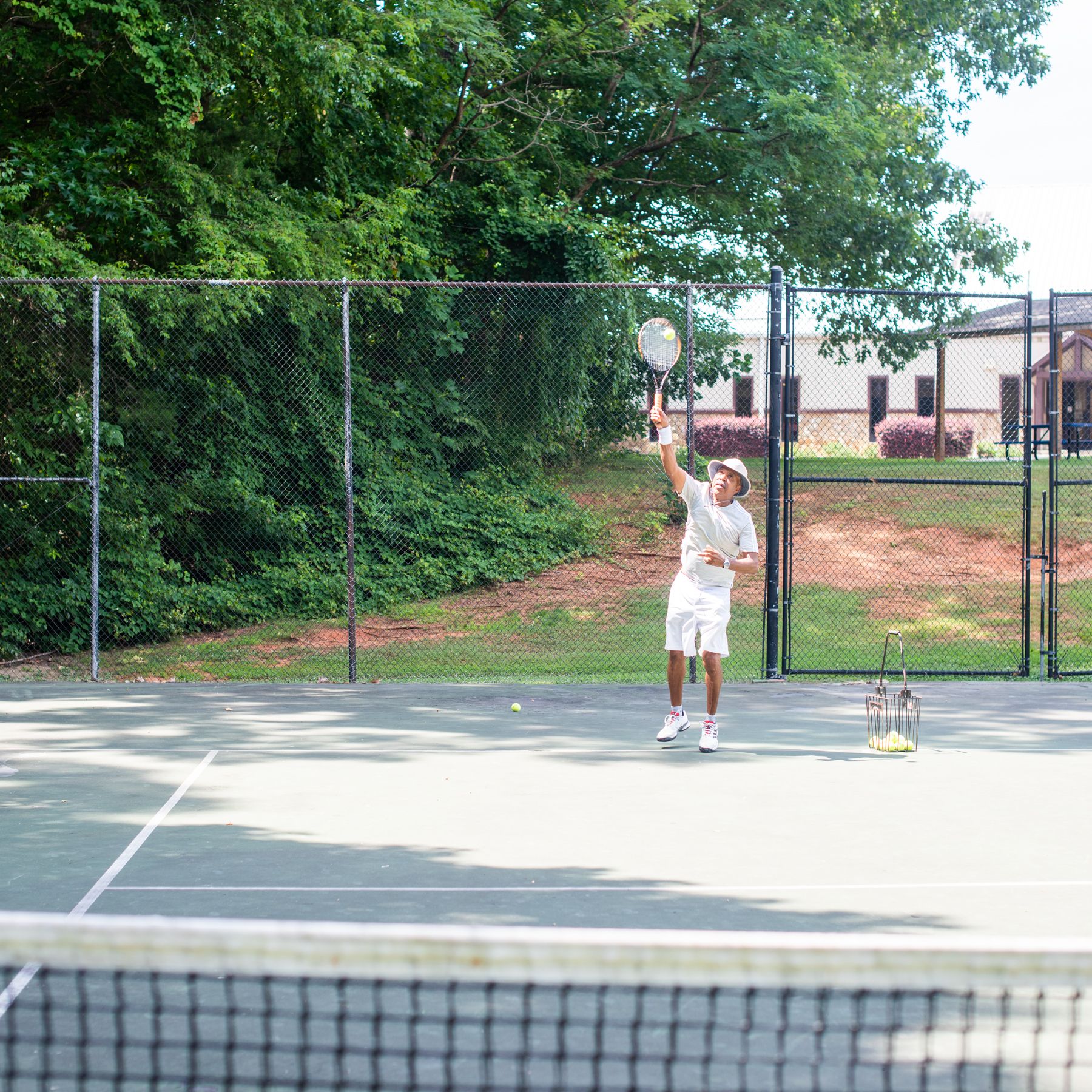 Junie makes use of games and healthy competition to motivate all his players – from the youngest to the oldest. He says when he sees instructors standing and talking to their students instead of playing, it’s “like a death sentence.” He wants to keep his players active, moving, and excited about the game he loves so much.

Today, now 16 years later, Junie is grateful to have perspective, a long career in tennis, and his time in High Point.

He reminds his own children, three of whom played college tennis, how important it is to stick with something you love. He shares with them the perspective of the challenges he faced, saying with each generation things get better and better. He reflects on when he became the first African American to win the Virginia State Men’s Open Championship – a championship, Arthur Ashe hadn’t even been allowed to play in.

Instead of choosing bitterness, Junie channeled all of his energy into building a lifetime of success out of the tremendous talent he was given. 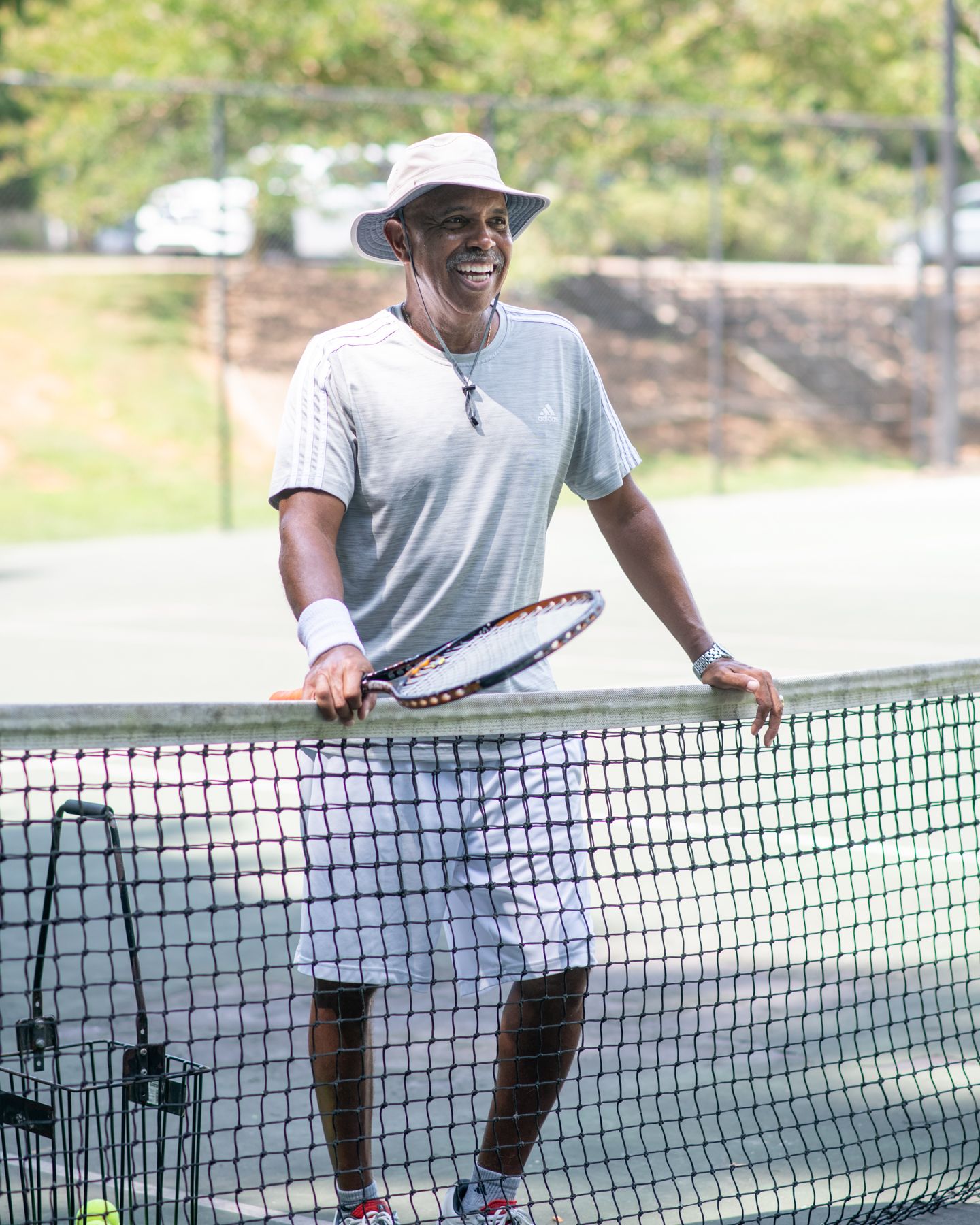 “It’s a blessing just to be able to do something you love to do,” Junie says, noting how much he encourages athletes to stay with their sport – even if the goal is never to go pro. Instead, Junie’s goals with tennis were to get a college scholarship, stay healthy, and to make an impact on a community – three things he was able to accomplish here in North Carolina.

Besides the Parks Department’s support of him even before he was hired, Junie says the thing that drew him to High Point was the desire to leave a lasting impact on the city.

“I’ve always thought High Point was a diamond in the rough,” Junie says of his adopted home city. “And I thought, I can make a difference here.”

After 16 years of teaching, training, and encouraging our city’s tennis athletes, aficionados, and amateurs, it’s clear that he was right. Game, set, and match to our very own Junie Chatman.

To learn more about tennis in High Point, to reserve a court, or book a lesson, call the Oak Hollow Tennis Center at 336-883-3493.